Posted on June 20, 2014 by photosfromtheloonybin

If you live in Southwestern Ontario, you will understand when I say this was a crazy week. If you don’t, let me explain.  On Tuesday, the weather was extremely unsettled, and there were weather watches and warnings for pretty much all of Southwestern Ontario.  As the red warning areas on the map spread to encompass a larger and larger area and the severe thunderstorm warnings changed to tornado warnings, everyone began intensely watching the sky.

When I got home around 3:20 pm, I spent the next couple of hours standing out on my deck watching the dark clouds roll in and monitoring my family’s whereabouts.  I absolutely love watching storms, but I don’t like it when my hubby and kids are out driving in them.  Daniel, my 17 year old, had stayed late at school to work on a project, and when I heard reports of possible tornadoes just north of his school, I quickly texted him to see if he knew.  The principal had heard the same report and had called all of the students left in the school to the drama room which has no windows.  She told them they were all to stay put for the time being.  My hubby called me from about an hour and a half north of here, and I could barely hear him on the phone through the sounds of the vicious storm in the background.  He said visibility was pretty much nil from the wind and the rain, and everyone had their flashers on.  The DJ’s on the local radio station in that area kept interrupting the songs that were playing to tell people to take cover.  My hubby, of course, kept driving!!

Mike and Daniel finally made it home, and then I paced on the front porch waiting for my older son, Bryan, to arrive.  I knew, watching the direction the storm was taking, that he would be driving right into the worst of it, and it must have been a rough ride because when he pulled into the driveway and got out of his car, the first words out of his mouth were “HOLY F#@%!!”.   It wasn’t too long before we started hearing on the news and on Facebook that a tornado had touched down in Angus, Ontario which is very close to where Mike had been driving when he called me.  The tornado blew out windows, tore up fences and sheared off the tops of some homes when it hit at about 5:30 p.m. Estimates now say that over 100 homes were damaged, but luckily nobody was seriously injured.  Most people were still at work when it hit.  The pictures that have been posted on TV and online show a wicked path of destruction, and I feel so bad for the people whose homes are ruined.  An old neighbour of mine now lives in Angus, and two of her kids were home alone when the tornado hit.  She was talking to them by phone as she raced home to make sure they were ok.  Luckily, it missed them by two streets, but others weren’t so lucky.  I’ll tell you, I sure hugged by kids a little tighter that night!

The weather eventually settled down and yesterday was a beautiful, warm and sunny day. It’s hard to believe the difference a couple of days can make.  Anyway, now that the excitement is over, let’s move on to the matter at hand.  It’s Friday, and that means it’s mystery photo time.  I was experimenting some more with my new little macro lens for my iPhone, and although I didn’t have enough time to get this quite as crisp as I wanted (because I’m still learning how to use it properly), I thought it was still a really cool shot.  Let’s see what you can come up with this week. Ok, ready, set, go….. 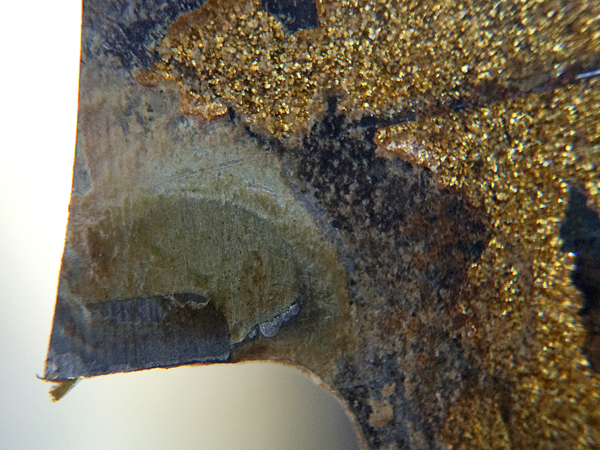