Posted on March 4, 2012 by photosfromtheloonybin

After spending the whole day yesterday with the wind howling and battering my house once again, a continued wind and weather theme does seem in order I think.  We spent all day Saturday under wind warnings as well as a blowing snow warning.  My husband had to drive 1 1/2 hours south to Toronto during the worst of it in the morning, and he said the roads should have been closed (which they were later).

As we live in the country, many of the highways are very open because of farmer’s fields on either side, so there is no protection from the blowing snow which can create havoc for drivers. Many areas within say a two hour radius of us were without power due to downed power lines, and one township not far from us actually declared a State of Emergency because of wind damage, whiteouts, and stranded drivers.  That’s a first for this area!!  We only lost our power for 30 minutes, so we were quite lucky because it can get really cold really fast in our house without power.  We don’t have a fireplace or a generator. 😦

Anyway, over the last week we have had everything from rain to freezing rain to snowy, blizzard-like conditions, and I have managed to capture it all with my camera in some way. The first picture shows water droplets on our patio door after a rain.  To some this may seem like a boring picture, but I really love it.  It’s not easy (I don’t think anyway) to get such a picture without the background outside the door or window interfering with the shot.  I was therefore quite happy with how this turned out.

Later, the rain became freezing rain, and even though it wasn’t fun being home sick that day, I was really glad I had not ventured out onto the ice-covered roads.  This photo was taken looking across the street at my neighbour’s house through my icy front window.  My hubby kept phoning to ask me what it was doing outside, but how could I tell? LOL 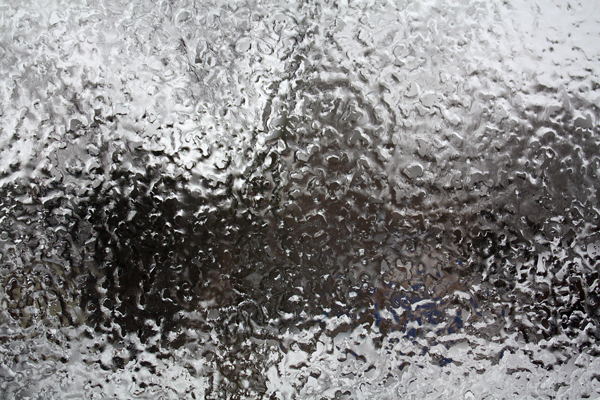 Then yesterday the wind arrived in full force.  Of course, no photo can ever quite do justice to what you see before your eyes, and it’s hard to see the snow in this next picture because it was a fine snow that was whipping by the house so fast.  However, if you concentrate really hard, you might be able to feel the house shaking and hear the wind howling.  It was the type of cold wind that takes your breath away.  Can you tell which way it was blowing?